The Greater Toronto Area is currently faced with a huge emerald ash borer crisis. It is estimated that over the next 10-15 years we will lose most of the millions of ash trees in the area to Emerald Ash Borer. In fact some reports even suggest that the insect will kill most of them as early as 2017. The loss of so many trees will have both economic and environmental impacts, particularly in areas where ash tree populations are high.

What Is The Emerald Ash Borer?

The emerald ash borer is a shiny emerald green beetle approximately ½ inch long and 1/16 inch wide. It has a flat back and rounded abdomen and is known to kill ash trees. Ash is found in many North American forests and is also a commonly planted street and landscape tree. This beetle arrived in North America from Asia and was first noticed in 2002 in Windsor, Ontario. Experts say that it is likely that this beetle will spread by natural means and through movement of ash products such as firewood, nursery stock, and logs. The earliest possible detection of this insect is essential to help reduce spread and damage.

Some signs of the presence of the Emerald Ash Borer:

New infestations of emerald ash borer are very difficult to detect. By the time you detect these signs the tree is usually already heavily infested. Since similar signs and symptoms can be caused by other pests, drought, or cold stress, you will need an expert to verify the presence of the emerald ash borer in a tree.

Property owners can also limit the damage by having their ash trees injected with “Tree Azin”. This product is effective in providing two years of protection against Emerald Ash Borer. However, trees currently infested may require removal.

If you notice any of the above signs, please call Ontree immediately to discuss your options. 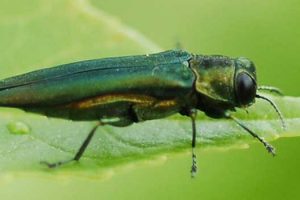 Emerald ash borer The Emerald Ash Borer (EAB) is an[...]